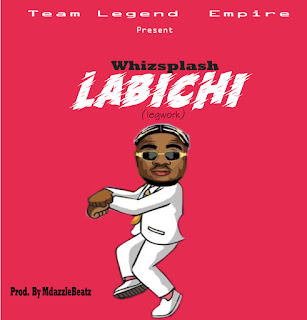 A young talented artist from bida whizsplash drop Anticipate New Jam Set up for all my fans and family and friends ("LABICHI")which mean Legwork to Nupe Language From Team Legend Emipre. And this song was produced by MdazzleBeat mixed and mastered by Dj Connect.
Download enjoy and share it with your friends. 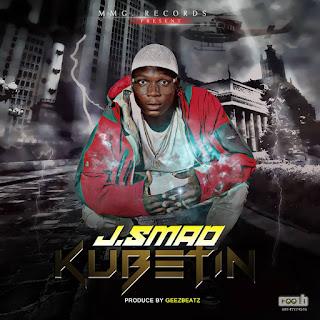 A young talented MX fast rising rapper,  popularly known as  J.Smad has delivered another hit monster single  titled "(Kubetin)". This track was dedicated to his parents (Mother and Father), its full of Confessions, Questions and Prayers for all fathers and mothers.
J.Smad Kubetin is a song that anyone who loves his Mother and Father dearly can't afford to miss. Download enjoy and share it with your friends. 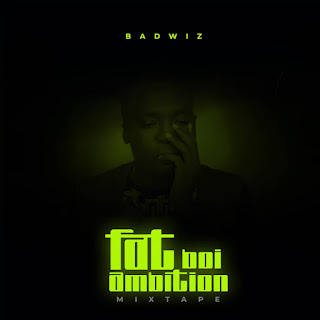 Young talented Northern Based Fasting rising Nigeria rapper Badwiz bless us with a six dope tracks Appetizer Mixtape Titled "(FatBoi Ambition)"
The Mixtape is meant as a project to Anticipate his EP Untold Stories the Mixtape Featured No Artist.
But Badwiz has taken us deep into his essence of lyricism with his story telling and Motivational Rap Patter.Badwiz is sure ready to confront the HipHop Industry with his unique rap Pattern, and he shows that he is a force to Reckon With.
The Mixtape was Recorded @ RespectedAboki Recording Studio with Production credits to Mdazzle Beats And Badwiz.
Please Follow Badwiz On Twitter and Instagram @RealBadwiz. 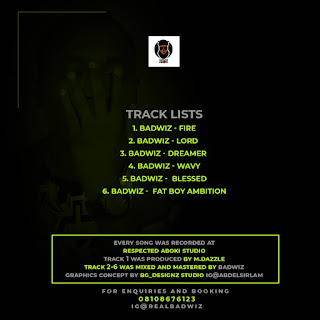 Comment and tell us how you feel about the mixtape God bless you all.

August 28, 2019 Comment
Check out brief history of KinNupe and kings 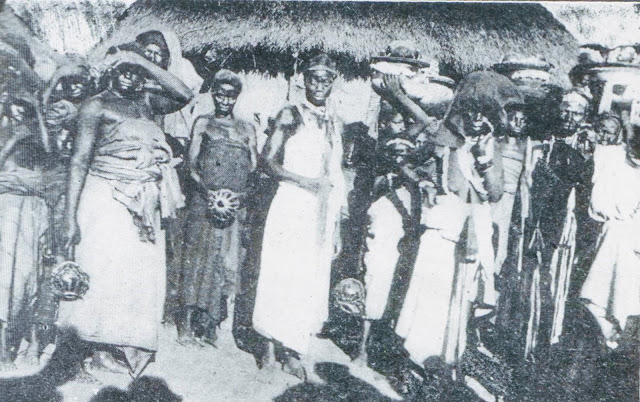 BRIEF HISTORY OF NUPE
THE nupe people have been around here in kinnupe since immemorial. And central kinnupe has always been this general area straddling the river niger on both banks from the bend of the niger to the niger-benue confluence.
The history of the nupe nation did not start with Tsoede or Tsuedi at the beginning of the 13th century. The nupe nation came into extistence millennia before the time of Tsudi.

The greek historian Diodorus Siculus, writing some 60 year BC, wrote that Osiris the founder of almost all the civilizations of the world came from the same place that is known today as central Nigeria, kinnupe.

Professor leo frobenuis wrote that long before Tsudi there was a greater nupe founder called Estu Nupeta. This Emperor Estu nupeta ruled over an almighty or superpower nupe emiper at the beginning of the 7th century. So great was estu nupeta that, according to professor leo frobenius, he became the founder of almost all the ancient kingdoms, states and people of ancient Nigeria. Together with his war General  popularly known as kisra but known to Nupe historians as Estu Yisa or Estu Tsara, Emperor Estu Nupeta  became the founder of the Hausa Bakwai, the Yoruba race, and many other ancient Nigerian states and peoples.

After the demis of both Estu Nupeta and Estu Yisa the Nupe Empire became divided between the Gwaga OR Bagi dynasts descendants of Estu Nupeta and the Yisazhi or Nyizagi dynasts descendants of Estu Yisa or Kisra.
Osiris, otherwise known as Dionysus, was the founder of the ancient Egyptian, Arabian, Indian, Chinese and other  world civilizations at the very beginning of prehistory itself. And this Osiris or Dionysus came from here Kin Nupe.

El Bakri, the Andalusian Arabian historian of the 11th century, wrote of an Egyptian pharaoh who visited Kin Nupe in 1700 BC, that is close to four thousand years ago, in searching of the legendary black stone. And interstingly enough, the Egyptian hieroglyphic records narrated that Egyptian pharaohs used to engage the service of philosopher-priests known as the dancing pygmies from this same area known as Kin Nupe today. We see that the ancients were well aware of the existence of a powerful Nupe nation right from the beginning of mankind. So the history of Kin Nupe nation did not start with Tsudi or Tsode in the 13th century.
Tsudi  was simply the last of the several Nupe founders the first of whose era goes back to those barely perceievable days of Osiris the nupe founder of the world civilization.
Plato, the well-known as Classical Greek Philosopher, writing some 300 years before Diodorus Siculus, also wrote of his uncle Solon, one of the Seven Wise Men of ancient Greece, visiting the philosopher-priests of the kingdom of Sais which was located in the same general area that we call Kin Nupe today. And a hundred years or so before Plato we also saw Hanno the Carthaginian navigator sailing from Carthage in north Africa right across the Guinea Coast to the Niger Delta on his way to locate the Hesperides inparadisiacal Kin Nupe. Also Even the Arabians and the ancient Egyptians were aware of a powerful Nupe Nation in prehistoric time.

The Nyizagi dynasts ruled over the kitsa or zagi kingdom to the North while the Bagi dynasts ruled over the Gbara kingdom to the south. The Kitsa or Zagi Nupe kingdom was variously known as zagizagi, Zazzau or as we call it today, Zaria-it was a Nupe kingdom through and queen Amina of Zaria was a Nupe woman. While the Gbara Nupe kingdom was also variously known as Brono, Borgu, Gobir or, as we call it today, Bini. Various nupe founders came who tried to unite Nyizagi and Bagi back into a united Kingdom and the results were various Nupe united kingdoms the most popular of which was the Atagara Nupe united kingdom.

The Kano chronicle wrote that Atagara was a Nupe Kingdom located in the same place where Bida is located today here in central KinNupe. Atagbara  was an almighty nupe kingdom and was also variously know as Apa, Wapan, Kagara, Katagara,(Kontogora), old Gbara, old Mokwa, and so on. Atagbara the superpower nupe kingdom dominated nupe history for well over a millennium before it began to decline. In its days of decline one of the nupe kings of the nupe kingdom of Atagbara became the father of Tsoede or Tsudi. The rise of Tsudi to superme power over Kinnupe led to the final fall of Atagbara and  the emergence of the famous nupe kingdom of Kororofa of Kwararafa which is actually known as to nupe historians as nupekoro or Nupeko. The nupe traditions are categorical in narrating that Tsoede or Tsudi was the founder of Nupeko or Kororofa. Snd just like his great grandfather Estu Nupeta did with the Nupe Empire in the 7th century, Tsudi used his nupeko or Kororofa nupe Empire to found and establish several of the ancient Nigerian peoples we now found in the Nigerian middle belt including the Igala, the Idoma, the Ebira, the Itsekiri, the Ijaw and many more others.

Tsudi’s regional capital to the south was at old Ife or original Ile Ife which was a Nupe capital city located around the same area where budan used to be located close to muye in Kakanda land here in Kin nupe. As a matter of the fact the southern nupe people of the kakanda, the kupa, the Dibo-Ganagana, Cekpa, and others were all part and parcel of tsudi’s kororofa nupe empire. After  Tsudi the nupe empire remained united for a long time with rulership alternating between the gwagba descendants of estu nupeta and the the Yisa descendants of Estu Yisa or Kisra. This unity, however, came to a sudden end in 1796 upon the death of Estu manman. Trouble actually began back in 1785 when Estu Jimada of the instead name Majiya, of the nupeta dynasty, as his Shaba or heir apparent. Estu Jimada instead name his own son Idirisa as his Shaba thereby bringing the age-old alternating rulership between the two dynasties to an abrupt end. Majiya rebelled and decleared himself the new Estu nupe. The result was the civil war in 1796 that shattered the nupe empire into two rival nupe kingdoms; a western nupe kingdom ruled by the descendants of Estu nupeta headed by Estu Yisa or Estu Kisra headed by Estu Jimanda at Gbara and Zhima. This nupe civil war was exacerbated by the contempotemporaneous emergence of the nupe saint called Shehu abdullraham Gbaji who seized on the opportunity of the fighting between the two nupe dynasties to establish his own nupe caliphate at mokwa the first Islamic caliphate in the history of pre colonial Nigeria. Shehu abdullrahman Gbaji Jihad activities ushered in the nupe Islamic revolution that resulted in the rise of mallam Dendo or Monko as the head of the nupe,Fulani jihadists who eventually seized the initiative of the Islamic jihad from Shehu Abdullrahman Gbaji.Manko together with his sons and other Fulani Mallams including mallam musa kodogi of Bida, mallam Babba of Agaie, mallam Ibrahim and his brother manzuma of Lafiyagi, mallam Alimi of Ilorin, immediately grew into the most formidable religio-political forc in kin nupe.

In the end and after the battle of Ilorin or the Mugbamugba war in 1825, Mallam Dendo became the superme power in kin nupe and immediately established his Raba emirate at Raba as the new capital city of kin nupe.

Mallam Babba also went and establish his own Agaie emirate, mallam Ibrahim and his brother Manzuma went and establish the Lafiyagi emirate and mallam Alimi went ahead to establish the Ilorin emirate. After the death of mallam Dendo in 1832 his son Usman Zaki became the first of Emire of nupe Raba. But his junior brother Masaba rebelled against Usman Zaki. In 1842 Masaba, allied with Estu Tsode razed Raba to ashes with usman Zaki fleeing into exile.

Masaba  became the Estu nupe with his capital city at Lade but his own war general Umaru bahaushe rebelled against him and overthrew him from power five years later in 1847. Umaru bahaushe declared himself the new Estu nupe. For nine solid years Umaru bashaushe ruled kin nupe but in 1857 mallam Dendo’s children all came back from exile  and concertedly faught Umaru Bahaushe in a series of battles mostly around the old nupe Binitown  of Bida  that end with the drowning of Umaru Bahaushe at the Gbako river outside Bida.

After the death of Umaru Bahaushe the children of mallam Dendo remained at Bida which they transfermed into the new capital of nupe. Usman Zaki ruled for a second term as Estu nupe from 1857 to 1859 when he died.

Estu Abubakar became Estu nupe in 1895, it was during his regin in 1897 that the cantankerous British imperialists callously invaded and conquered Bida. The british deposed Estu Abubakar and installed Estu muhammadu Makun as the new Estu nupe. Estu muhammadu Makun ruled from 1897 to 1916. He succeeded by Estu Musa Bello who ruled from 1916 to 1926, which he was succeeded by Estu Saidu Muhammadu Ndayako which is popularly known as Estu ba’kudu. 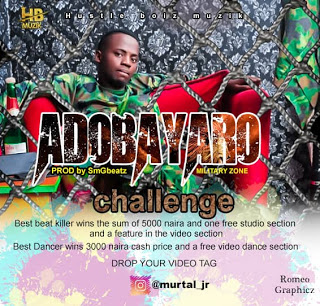 A talented artist murtal-jr Unleashed another hit  track tilted (Adobayaro)
after the releasing "Atapah" collaborating with the baddest rapper Ely Jakes all way from Respected Aboki Ent.Adobayaro was produced mixed and mastered by the award-winning Dj SmGbeatz.
Please download and share your thoughts. 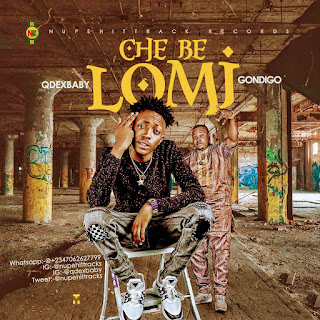