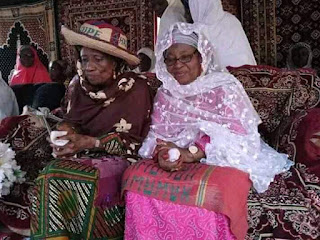 HRH Alh. (Dr). Yahaya Abubakar CFR, the Etsu Nupe and Chairman Niger State Council of Traditional Rulers, through the third in command of the Emirate council and the most senior traditional title holder of Masaba dynasty, Alh. Abdullahi Y. Manko (Kpotun Nupe), conferred on Her Royal Majesty Haj. Hauwa Umar Sanda Ndayako the traditional title of "Ninwoye Nupe" (Wogbo), which is equivalent to the rank of second in command, under the female royal class of the emirate council. She is the next to Sagi Nupe by hierarchy.

The official conferment was at the ancestral home of the second Etsu Nupe, Late Etsu Manmma Saba (Masaba palace). There was lots of entertainment, in a nutshell, it was memorable, as daughters/princesses from the three ruling houses come out in their vast figure to celebrate with the new "Ninwoye Nupe". Prayers were also offered for her beloved sister Haj. Adama Alfa Saba (Yadya) (my maternal grandmother) and for the repose of her ancestors.

• Upshot of the new Ninwoye Nupe:

Until her appointment as the 5th Ninwoye Nupe, she was the wife of the immediate past Etsu Nupe, Late Alh. (Dr). Umar Sanda Ndayako (the 12 Etsu Nupe) and the mother in-law to the 13th Etsu Nupe.

• The chronology of Ninwoye Nupe till date: